Is Our Nation's Money Supply Really This High?

It has been a while since the economy has been hit this hard by inflation. Rising prices are the accepted universal cause of inflation. But another way to think of inflation is that the available supply of money has dramatically increased, and consumers are outbidding each other for limited supplies and services by paying the higher prices.

So how much money is circulating out there and ready to be spent? Is it more than before the pandemic?

The Federal Reserve publishes weekly and monthly data on two money supply measures. These measures reflect the different degrees of liquidity that different types of money have:

The narrowest measure, M1, is restricted to the most liquid forms of money; it consists of currency in the hands of the public; travelers’ checks; demand deposits, and otherdeposits against which checks can be written. M2 includes M1, plus savings accounts, time deposits of under $100,000, and balances in retail money market mutual funds.

Below is a graph that illustrates the sudden rise in the M1 Money Supply. The tremendous surge Since M1 is comprised of the most liquid forms of money that checks can draw from, the chart below illustrates the explosive growth in the amount of money sitting in demand deposits in the past twenty months. 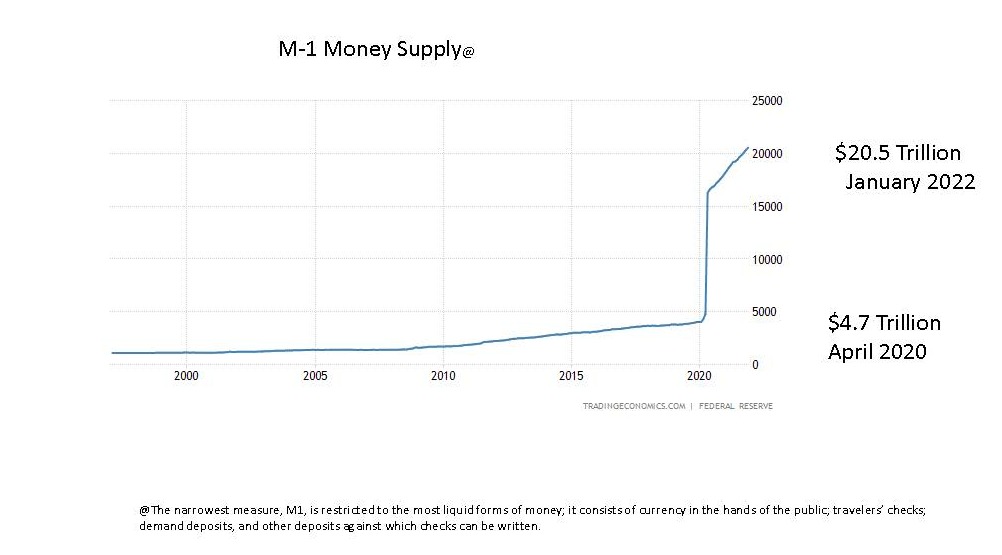 For twenty years, M1 stayed within a range of $4.1 to $4.8 trillion, the past twenty-two months have seen an increase of almost 500% to $21.5 trillion. A combination of government stimulus and people saving due to the shut-off of various supplies during the pandemic were the main reasons M1 has exploded to unprecedented levels.

The Federal Reserve, the folks who oversee our monetary policy, has stated for months that a rate increase is coming in March of 2022. March happens to also be the month they plan to stop injecting more money (printing) into the economy². Raising rates before March would have been like raising admission prices to avoid over-crowding but at the same time keep offering cheaper tickets to the general public.

² Quantitative Easing – Since March of 2020, the Fed has injected over $4.5 trillion into the economy through the purchase of U.S. Treasuries and Mortgage-Backed Securities.

The Fed has options, but they really fall into two categories:

Inflation will “Self-Correct” itself

The hope here is that the obstacles that were keeping the supply chain from functioning properly will slowly evaporate and absorb the pent-up demand without further need to increase interest rates. I am not sure about this one because future price increases may not be the result of supply chain clogs, but more because of the surging demand for goods and services. If prices continue to rise because of the excess money supply, hoping for a self-correction without raising rates may create a need to increase rates faster and larger later this year – a move that could signal the beginning of slow growth.

Raising rates too fast will hurt the economy

The fear that the economy will dive into a recession with higher-than-expected interest rate increases may be worthy of concern if it were not for the nation’s employment numbers. As of January 2022, the U.S. has approximately 10.9 million job openings². The number of unemployed persons looking for work in January was 6.5 million². The link between the excess money supply and the urge to ramp up production cannot be denied. Companies will make production a priority over the next few months as supply chains become normalized and pandemic-related restrictions are eventually lifted.

The concern here is that once the economic activity settles and the government stimulus has been fully absorbed (spent), we’ll be looking at higher inflation rates without the increased demand. Raising rates may quicken the onset of the next phase of the business cycle – recession.

Ideally, the returns from investments should be at least large enough to cover the price increases of the items that make up your living expenses. If the cost-of-living increases exceed additional income amounts, there is actually a loss in purchasing power.

If annual inflation remains at today’s level of 7%, to achieve a positive “real” return (net of inflation), your investment returns should be greater than 7%. That seems quite a task considering CD rates and short-term U.S. Treasuries earn less than 1% today. Unfortunately, the investor, to make up for the damaging impact of losing purchasing power, will seek higher-yielding investments which will expose them to more risk than they thought they would need to tolerate at this phase in life.

There are public investments available designed to protect against rising unexpected inflation (TIPS & I Bonds). These instruments increase their yield as inflation rises. Some investments also provide a reasonable hedge against inflation such as real estate or commodities since they are the items most likely rising in value due to inflation. Gold and metals not only have provided positive returns, but they also serve as a backstop to the potential devaluation of global currencies.

I am not sure a small increase in interest rates will be enough to persuade consumers from spending the massive amounts of cash they have at their disposal. The money sitting already belongs to the consumer. Why would an increase in borrowing rates discourage them from spending these already owned funds? The other option is for consumers to save, pay off debt, or invest the funds.

The recent raising of prices and the topic of inflation has only added another future uncertainty that has to be planned for. Just like investment returns or interest rates, we cannot control inflation. But there are things that we can control such as how much fees will you pay? Or how diversified do you want to be? What investment strategy are you using (active v. passive)? How much risk can you tolerate?

If you have financial goals and objectives and you would like help achieving them, please review our website and contact us to schedule a no-charge consultation to see how our firm can help you.

Investments involve risks. The investment return and principal value of an investment may fluctuate so that an investor’s shares, when redeemed, may be worth more or less than their original value. Past performance is not a guarantee of future results.