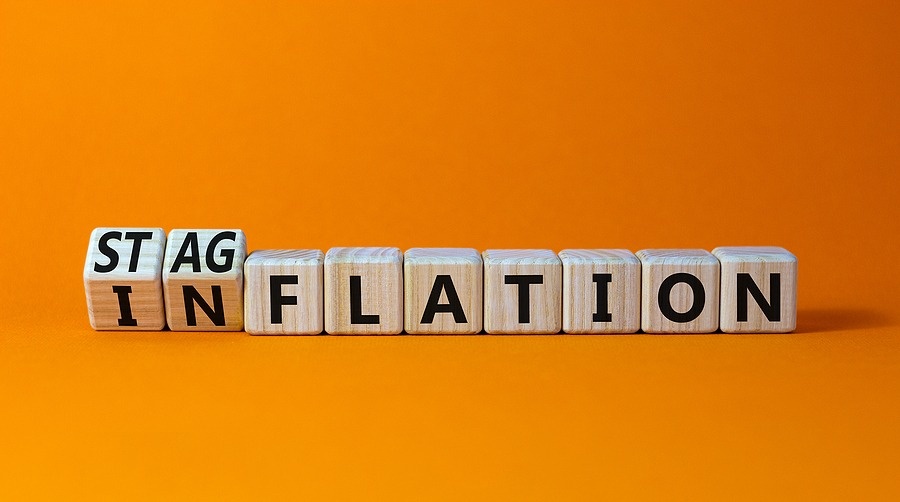 Stagflation - Get Used To The Term

Stagflation - a term that refers to high inflation that happens simultaneously as stagnation of growth or outright recession.

When consumer demand rises above potential supply, prices tend to increase. When prices rise, the Federal Reserve will employ certain maneuvers intended to slow down price increases, none more dramatic than raising the interest rate which banks pay to borrow from each other (usually overnight).

Other than a basic theory that raising costs to borrow money will deter borrowers from borrowing, our experience with these types of inflation numbers and corresponding rate increases has been limited. The late 1970s and early 1980s were the last time inflation approached today’s current price increases. What is supposed to happen is the lack of borrowing will reduce excess demand, and prices will eventually fall. But the catch is that the economy must absorb the decline in borrowing (assumed to be borrowed for expansion, research, hiring, facilities, etc.) and avoid increases in unemployment. But what happens if the problem is not an excess demand for goods and services but rather the results of a negative shock to the supply of goods and services?

What started all this current economic malaise we’re facing was, of course, COVID-19. In early 2020, consumer demand took a sudden and dramatic downturn because of COVID-19 lockdowns and business closures. Travel and entertainment became essentially non-existent for a while. However, when restrictions were being lifted gradually, the pent-up demand exploded, and there simply was not enough supply to handle the demand surge. Prices have been rising ever since.

Inflation – Prices rising from one period to another.

Deflation – Prices decrease from one period to another.

Disinflation – Prices are increasing but at a slower rate. For example, September’s annual increase was 7.9%, and October’s was 7.7% - disinflation.

Stagflation – Prices rise while the economy is in a recession.

Here are some questions and answers to help better understand:

Will the latest CPI report confirming an inflation rate of 7.7% from October 2021 to October 2022 suggest the Fed may slow down rate increases?

The Federal Reserve has persistently reinforced its commitment to fight inflation since March of 2022, when the Fed announced the first of six increases this year. Mr. Powell understands the damaging long-term effects of persistent inflation. I don't think he will let one month of data, which still revealed abnormally high one-year price increases, soften that commitment.

You bet it will. Today the report on national retail sales showed an increase in retail sales from September. This increase happened when price increases were close to double-digit inflation territory. With the Holidays at our doorstep, and unemployment remaining historically low, there is no reason to believe there will be a slowdown during the next few weeks. According to the Federal Reserve, there is still approximately $1.2 trillion to $1.8 trillion in U.S. Savings accounts potentially waiting to be spent. Credit use is increasing for those excluded from holding large amounts of disposable cash even though the interest-rate environment is gradually approaching the "I can't make my debt payments" territory.

The easy answer is, "Well, it sure hasn't worked so far," considering that growing inflation is the nation's most significant concern. But what would the inflation rate be if interest rates had not occurred as frequently and comparably large as they have? (Britain's October inflation for the past 12 months ending October was 11.1%).

The rate increases should ultimately work at reducing demand, but will the world's central banks stay committed to lowering inflation through the increases? Or will they give in and reemphasize lower rates to fight the potential recession? If the Federal Reserve bails before prices fall, we risk high inflation and a recession simultaneously – Stagflation!

What is a “hard landing,” and why does the Fed want a “soft landing” instead?

The more rate increases the Fed unleashes on the economy, the greater chance of a pending recession due to adverse effects of reduced business activity, such as higher unemployment, lower consumer demand, and more people unable to pay their higher-interest debt. The more severe and prolonged any recession, the harder the landing. Higher inflation will only create further distress.

Conversely, a soft landing would occur if interest rate increases were lower, less frequent, and prices began to fall to target inflation of approximately 2% without the economy stalling or unemployment dramatically rising. With those circumstances, a prolonged recession may be avoided.

What makes the situation today different than the economic turmoil during the 1970s and the Great Recession of 2008?

The 1970s witnessed a couple of major global adverse supply shocks with the Arab oil embargo and the Iranian revolution. Energy prices jumped significantly, which triggered a recession. There was also an inflation problem:

Rising energy prices and the Fed’s action of lowering interest rates to stimulate the economy caused prices to rise even faster. But thankfully, debt levels for individuals and the government were much lower than today, and the economy could recover without a debt crisis. See Chart.

The 2008 financial crisis was undoubtedly about debt. The mortgage crisis created lower demand and a resulting recession. Because the crisis was more of a demand issue than a supply one, lowering interest rates helped the economy recover without triggering higher prices. Therefore, there was no need to raise interest rates to combat inflation. Debt levels had reached alarming levels in 2008, but higher interest rates never came.

Today, we have higher inflation, like in the 70s, but we also have higher debt ratios than 2008. Rising interest rates may not only lead the U.S. into a recession, but the elevated debt ratios by businesses, individuals, and the government may trigger massive defaults and insolvencies. Stagflation would be present if the inflation rate remained high during the potential recession.

How does inflation or stagflation impact asset allocation decisions?

In a typical portfolio, the investor is a lender (buying bonds) or shareholder (buying company shares). Rising prices and interest rates affect both investing roles:

Rising inflation makes lending on a long-term basis less attractive since the fixed interest payments will be received in a rising inflation environment which can cause a loss of purchasing power on long-term bond investments.
Rising interest rates intending to slow down or halt inflation will have a negative impact on bonds because the coupon rate on newly issued bonds will have higher returns than existing lower-yielding bonds, which result in lower values. The longer the bond term, the longer these coupon payments will be subject to the risk of rising interest rates.

Shorter-term bonds are preferable in a time of rising inflation and interest rates because the bonds can be rolled over to higher-yielding bonds more frequently when rates rise.

The average Certificate of Deposit today yields approximately 3.5% to 4.0% for 90-day instruments. It has been a stretch since CD rates have been that high. Investment allocations in the past put little weight on holding cash since rates of return of cash and cash equivalents were historically low for two decades. Today's higher yields on the safest investments may allow investors to reevaluate their portfolio allocations.

Treasury inflation-protected securities
(TIPS) are a type of Treasury security issued by the U.S. government. TIPS are indexed to inflation in order to protect investors from a decline in the purchasing power of their money. As inflation rises, rather than their yield increasing, TIPS instead adjust in price (principal amount) in order to maintain their real value.

Commodities
Because commodities prices typically rise when inflation is accelerating, they generally offer protection from the effects of inflation.

Real Estate
In general, real estate is considered a good hedge against inflation because it tends to keep pace with other surrounding costs that are on the rise.

If you already have a plan, reviewing your strategies and assumptions to accomplish your financial goals may be a good idea. The straightforward planning objective of “Can I afford my financial goals in the future?” has possibly become more difficult to accomplish due to the rising costs of goals.

If you haven’t created a financial plan, it may be a good time to do so. There are many variables and uncertainties to deal with in planning for your future, and inflation is certainly one of the more critical ones.

Please visit my website for further information about my company's services and its educational resources. And, of course, please feel free to contact us if you have a question or would like to schedule a no-charge initial consultation.

Past performance is no guarantee of future results.

Investing risks include loss of principal and fluctuating value.

There is no guarantee an investment strategy will be successful.