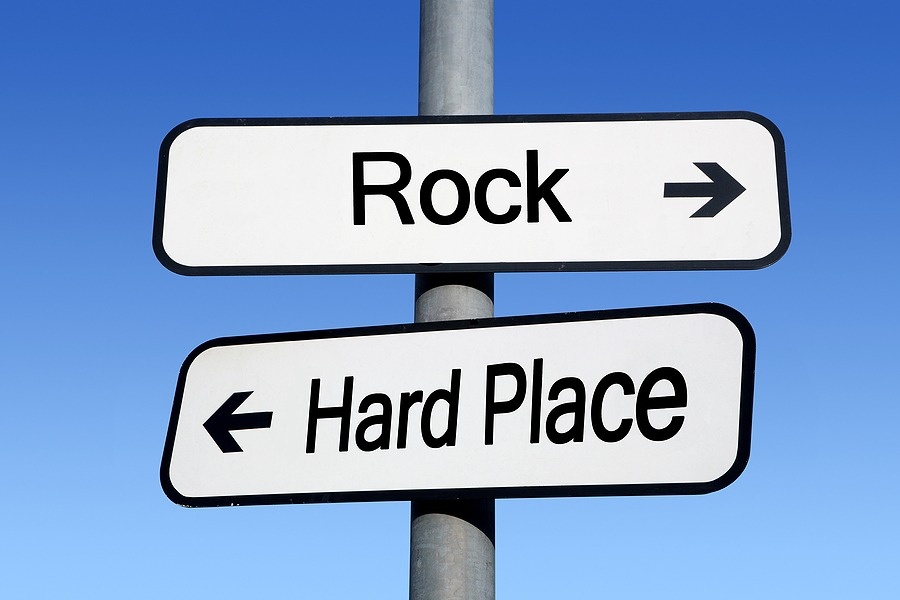 The Fed - Between A Rock & A Hard Place

The Federal Reserve Open Market Committee met yesterday as they do every six weeks or so, and the resulting message from Federal Reserve Chairman Jerome Powell was no more than expected, which was to leave rates unchanged for now, but confirm the gradual decrease of “created” money put into the economy through their purchase (lending) of bonds, otherwise known as Quantitative Easing (QE). Many economists and investors believe that inflation is a greater threat to our economy currently and raising interest rates ¹ would be considered the appropriate step. The Fed decided, however, to not raise interest rates now, but wait until spring of 2022 when quantitative easing ceases (see below). The “plan” is to maybe, possibly, raise rates three times next year instead of 2023 to combat the inflation they thought was only temporary. The dilemma for Jerome Powell and the Fed is the risk of waiting too long to stop the rising tide of prices which can have a sudden and detrimental impact on the economy.

¹ The Fed has control over rates that member banks (most large commercial banks) charge each other. Higher rates charged to banks will compel them to raise their lending rates to consumers and businesses. 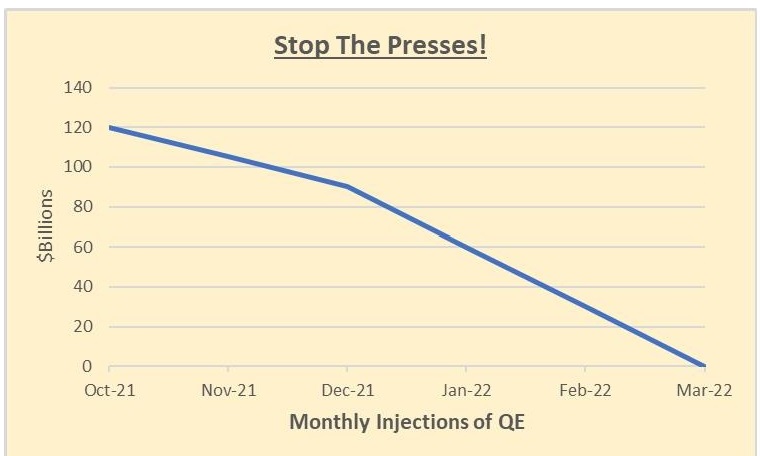 Will today’s message impact inflation in the short-term? Probably not because the reality is money is still being pumped into the economy which traditionally is fuel for rising prices – the pace is just slowing, not ending.  It does not seem practical that interest rates would be raised to combat rising prices (lowering money supply) while at the same time buying hundreds of billions of dollars each month of government and corporate bonds (increasing money supply).  This is the less painful policy strategy compared to raising interest rates which is what the Fed is trying to avert at all costs. However, the uncertainty of even six weeks from now when the Fed meets again alerts us not to rule out perhaps even a faster reduction (tapering) of QE injections to the money supply each month and/or a much quicker rise in rates.

If prices of goods and services continue to rise (highest increase in 39 years), there will be less money to spend on other items and slowly the lower overall demand will impact production and manufacturing, which will most likely involve layoffs, lower personal income, and debt defaults. We clearly don’t know how the persistent pandemic will adversely impact supply chains next spring; it could be better, the same, or worse than what we are experiencing now.

The Risk of Not Waiting – Raise Interest Rates Now

Raising interest rates is hardly seen as a positive action by most economists and investors – except of course if you are a retiree seeking better savings rates. Between mortgage debt, student loan debt, credit card debt, and our national debt, increasing rates will have an impact on our economy. Lower consumer demand will most likely follow since more money is being spent on higher debt payments and less on other items. Then ultimately the process will play out as the same as not raising rates described above.

Please see my blog on “Inflation is Here To Stay – Now What?” to view a description on investment alternatives to rising inflation and interest rates. Please feel free to contact us if you would like to discuss your personal situation with Anthony B. Carr, CPA, CFP™